View source
watch 01:40
The Sandman Will Keep You Awake - The Loop
Do you like this video?
Play Sound
Darcy Lewis 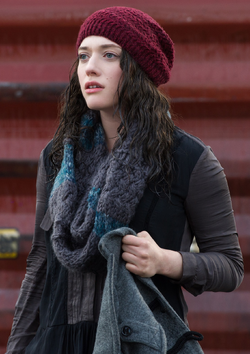 Darcy Lewis is an intern of Jane Foster, and is portrayed by Kat Dennings.

Darcy Lewis was travelling in a van with scientists Jane Foster, and Erik Selvig, when the mysterious weather event subject of Foster's research unexpectedly resulted in a powerful vortex before them. As they struggled under the zero-visibility conditions, the van collided with a man who had stumbled out of the dust into their path. The man, who only announced himself as Thor, was injured again when Darcy tased him, prompting them to take him to hospital.

The following day, Darcy made a surprise discovery when she noticed the figure of a man in one of the photographic images captured from the atmospheric event. While Jane realised that the newcomer might be able to shed some light on the event, Selvig was more sceptical, sparking a lengthy disagreement that Darcy only rarely weighed in on to support the more fanciful elements of Foster's theories.

Darcy continued to tag along with the scientists, providing numerous observations about their rapidly changing situation that were sometimes even helpful.

Darcy Lewis is an emotional and impulsive girl, surrounded by scientists. Despite her obliviousness to science, she is generally the first to notice what's going on around her. She notices the anomaly first. She is the first to realize that Thor fell out of the anomaly. She is also the first to piece together that although Thor may not be a God, but that it is completely plausible for primitive cultures to revered him as such, and articulates that to Dr. Selvig beautifully on Jane's behalf.

She's anyway a good friend, ready to help Jane and Professor Selvig in their research, first, and in solving the mystery behind the man they found in New Mexico's desert.

Dr. Selvig and Jane are somewhat less charitable in their regard for her.