View source
watch 01:40
The Sandman Will Keep You Awake - The Loop
Do you like this video?
Play Sound

"I still don't think you're the god of thunder. But you ought to be!"
―Erik Selvig[src]

Erik Selvig is an astrophysicist and mentor of Jane Foster and Darcy Lewis. Dr. Selvig is a Professor of Theoretical Astrophysics at Culver University. His notes on thermonuclear astrophysics are key to understanding the Tesseract. 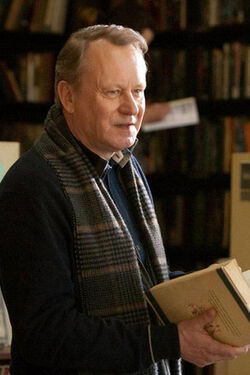 "Just listen to him Jane, he's going on about Thor and Bifrost, those were stories I heard when I was a child."
―Erik Selvig [src]

When Selvig was a child, he heard stories about Thor, the Bifrost, and Loki. Erik Selvig previously worked with Bruce Banner before the Gamma accident. He also has connections with Hank Pym.

"I have a lot to work with, the Foster theory, a gateway to another dimension, it's unpresidented, isn't it?"
―Erik Selvig[src]

Erik Selvig was travelling in a van with his colleague Jane Foster, and their assistant Darcy, when the mysterious weather event subject of Foster's research unexpectedly resulted in a powerful vortex before them. As they struggled with the zero-visibility conditions, the van collided with a man who had stumbled out of the dust into their path. The man, who only announced himself as Thor, was injured again when Lewis tazered him, prompting them to take him to hospital.

The following day, Darcy made a surprise discovery when she noticed the figure of a man in one of the photographic images captured from the atmospheric event. While Jane realised that the newcomer might be able to shed some light on the event, Erik was more sceptical. So began a lengthy disagreement between the two, with Jane theorising about the possibility of an Einstein-Rosen Bridge and Erik insisting that everything Thor had been saying about gods and other worlds was nothing more than delusional talk based on old myths.

Erik Selvig later befriended Thor, first securing his release from a temporary S.H.I.E.L.D. compound, and then drinking heavily with him at a town bar, prompting Thor to claim that Erik had "made his ancestors proud". They parted company after Thor's true nature had been fully revealed and Erik was finally able to see for himself the being behind the myth.

Sometime later, Erik Selvig was summoned to the presence of Nick Fury. Fury opened a storage case, revealing a glowing cube. When Selvig asked what it was, Fury replied that it represented a significant source of power, if only they could find a way to tap it. Erik accepted the challenge of investigating the object, while the apparition of Loki (who had been controlling him throughout the encounter) looked on with keen interest.

One year later, Selvig was still under Loki's influence. He states that he remembers Clint Barton from New Mexico, after he was assigned to guard the Tesseract at Project P.E.G.A.S.U.S..

The most prominent thing Erik has done in the whole movie is probably dancing around the Stonehenge...naked, and being arrested.

Afterwards, when Jane and Thor arrived back on Earth thanks to Darcy's...intern for throwing the car keys and leaving the red car in the carpark, he asked Thor if he had his brother--Loki--with him. Thor hesitantly and answered grimly that Loki was dead.

He shamlessly breathed, "Oh, thank God." Thor had glared at him, I'm sure. He then quickly corrected himself, "Uh, I'm very sorry."

When they had that awkwardly settled, they moved on to planning. At the final second, at the end of the long, speechless silence, he loudly announced he needed to go get his pants.

What? Not wearing your pants these days is a trend!

Erik Selvig is a brilliant scientist, deeply honest and a loyal friend. He's not as much idealistic as his young colleague, Jane, and immediately surrenders when S.H.I.E.L.D. arrives and takes away their research, but he surely believes in the necessity of his work. He's very protective towards Jane, and considers her some sort of a daughter.

Selvig, being of Scandinavian descent, said that he grew up listening to the legends of Thor and Asgard as a child. When Thor's human incarnation appears and claims to be Thor, Selvig immediately assumes the man is insane. Jane tries to convince Selvig to imagine the scientific possibility of the Norse gods existing and their magic having some distant scientific formula behind it, but he still regards Thor as being delusional.