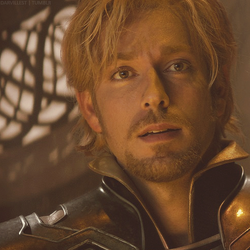 Fandral the Dashing is one of the Warriors Three (a trio of Asgardian adventurers) and is a friend of Thor.

Fandral is one of a trio of Asgardians adventurers known as the Warriors Three, and is a friend of Thor. He was present when the jotuns infiltrated the vaults while most of Asgard was preoccupied with a ceremony naming Thor as heir to Asgard's throne. When Thor becomes enraged by the interruption, Fandral readily agrees to accompany him to Jotunheim to revenge against the jotuns' aggression. Fandral gets injured during a battle against the Giants. Later, when Odin falls into Odinsleep and Loki becomes the king Fandral, Sif, and the rest of the Warriors Three suspect Loki's motives and decide to get Thor back to Asgard from Midgard, where he has been exiled until he learns humilation. The group fights against the Destroyer that was controlled by Loki, and then return to Asgard.

Fandral fights with Thor, Volstagg, Hogun and Sif in Vanaheim. Later he helps Thor, Jane and Loki escape from Asgard to Svartalfheim.

Fandral is known as Asgard’s finest swordsman, which serves him well as a member of the Warriors Three alongside Volstagg and Hogun. Fandral fights to protect Asgard from all foes. Fandral is known for his charm and good looks that woos the ladies.

In the movie Thor (2011) he is played by Joshua Dallas. Zachary Levi, star of NBC's Chuck, was originally set to play Fandral but had to pull out when Chuck season 3 order was extended from 13 to 19 episodes.

Fandral is now played by Zachary Levi in Thor: The Dark World, replacing Dallas after the actor's commitment to Once Upon a Time created scheduling conflicts.

Retrieved from "https://thor.fandom.com/wiki/Fandral_(movies)?oldid=8049"
Community content is available under CC-BY-SA unless otherwise noted.