"I am Loki of Asgard. And I am burdened with glorious purpose."
― Loki, The Avengers 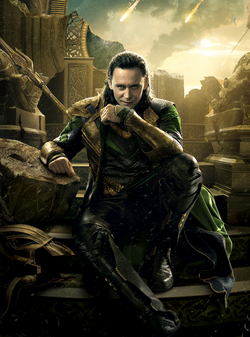 Loki is the main antagonist in Thor and The Avengers and a supporting protagonist in Thor: The Dark World. Loki was adopted by Odin and Frigga at the end of the Asgardians' war with the Frost Giants, Loki was treated as a prince of Asgard and never informed of his true heritage throughout his youth.

Loki is the son of the king of Jotunheim, Laufey. Being unusually small for a Frost Giant, Loki was abandoned in a temple to die. After the war between the Frost Giants and Asgardians had ended, Loki was found by Odin. Odin took the baby with him, altered his appearance with sorcery to resemble an Asgardian, and raised him as his son with his biological son Thor.

Growing up, Loki always felt like he was living in Thor's shadow and was envious to him for being the future king. Loki was interested in sorcery instead of Asgardian warrior arts, and his adoptive mother Frigga taught him everything she knew.

Loki's jealousy kept growing, and he was eager to prove himself to Odin to win his appreciation. His innocent mischief turned into more complicated plans and he started manipulating people. Loki became ambitious, and was willing to go to great lenghts to achieve greatness.

Jealous of his brother Thor, Loki allowed several Frost Giants to enter Asgard to try and steal the Casket of Ancient Winters during Thor's coronation.

Loki, Thor and Odin went to Odin's vault to investigate, and found the bodies of the Frost Giants and the Asgardian guards who had been murdered. Thor wanted to march into Jotunheim and attack the Frost Giants for breaking the peace treaty between the two realms. Odin, however, refused which made Thor even angier. The two started arguing, while Loki stayed silent and listened.

Regardless of Odin's opinions, Thor opted to launch a counterattack on Jotunheim with a number of his friends, and while Loki initially tried to dissuade his brother, he eventually relented and went along with the plan.

Upon their arrival at Heimdall's observatory, Loki attempts to use his cunning to trick Heimdall into letting them enter Jotunheim. However, Heimdall already knows of the group's plans, and embarrasses Loki. Heimdall tells the group he wants to know how the Jotuns made it into the kingdom without his knowledge, and opens the Bifrost to Jotunheim.

Once on Jotunheim, Thor again led them into conflict and attacked the Jotuns even after being granted safe passage home. During the ensuing fight, Loki was surprised by his own resistance to the Jotuns' freezing touch, a revelation that led him to conclude that he was at least partly Jotun rather than an Asgardian as he had been led to believe.

Despite the groups best efforts, they eventually become gravely outnumbered, and during the fray, Fandral is impaled through the chest by a shard of ice. While the rest of the group begins to retreat, Thor continues his assault, blind to his friend's peril.

A large monster awakens during the battle, and attacks the group, but is killed by Thor moments before it can strike. As the remaining Jotuns surround the group, the Bifrost activates and drops Odin, mounted upon his octopedal horse Sleipnir, into Jotunheim. He attempts to talk Laufey into a peace, but Laufey attempts to attack, and Odin retaliates, and Heimdall activates the Bifrost and pulls the group back to Asgard.

Back on Asgard Odin remains furious at Thor, telling him he had just started a new great war between Asgard and Jotunheim, Thor argues aggressively, but Odin calls him a vain, foolish and greedy boy. Loki mainly stays quiet, when he does try to intervene Odin tells him to remain silent. Odin takes away Thor's armor and powers and banishes him to Earth. Loki watches as Thor is thrown out of Asgard and Odin sends Thor's hammer after him with a spell meaning only one worthy of its power would be able to lift it.

In the healing chamber, Loki reveals to Sif and the Warriors Three that he in fact told Heimdall to inform Odin that they were heading to Jotunheim. Upon the other's questioning, Loki tells them he did it as he felt Thor was foolish to seek battle with the Frost Giants. He goes on to say that he did not, however, expect Odin to banish Thor for his arrogance and stupidity. The others began to suspect that Loki was involved with the Frost Giants' infiltration to Asgard.

Loki heads to Odin's vault, where he picks up and holds the Casket of Ancient Winters. Even while grasping it with both hands, Loki's skin is not affected by The Casket. Sensing Odin's arrival in the vault, Loki asks him if he is cursed, to which Odin replies no. Loki turns to him, his skin entirely blue and eyes bright red. Odin states that The Casket was not the only thing taken out of Jotunheim that day.

Loki demands to know the truth, and Odin tells him how he had discovered Loki as a baby and taken him in. Upon discovering his true heritage, Loki believed that Odin would have never put a Frost Giant on the throne of Asgard and became distraught, Loki berated Odin in denial, accusing him of using him as a tool for peace. Odin, overcome with stress over the recent dilemmas, fell into the deep Odinsleep. Loki walks over and looks down at Odin in a daze, before calling in the guards to help him move Odin back to his chambers.

With Odin comatose, Loki talks about his heritage with his mother. Frigga explains, that they didn't tell Loki of his origins, because they wanted him to feel like he belonged. A guard comes in, gives Loki Gungnir and pronounces him King of Asgard.

Loki gladly took the throne in his place. The Warriors Three and Lady Sif visit him and are shocked by the disappearance of Odin and Loki's new position. They request that he end Thor's banishment. Loki refuses, claiming his first action as king could not be to undo his father's last. Before they could argue he orders them to leave.

Loki visits Thor on Earth when he was being captured by S.H.I.E.L.D. when trying to regain Mjölnir. Thor asks Loki what had happened on Asgard, but Loki lies and tells him that Odin had died, in order to keep him unmotivated. Loki informs him that he had taken on the burden of the throne and that the peace is dependant on Thor's banishment from Asgard. Thor sadly agrees and says goodbye to his brother. After leaving Loki attempts to lift Thor's hammer but fails.

Loki also visits Laufey, introducing himself as the one who had let Frost Giants in to Asgard. Loki explains that he had just wanted to have some fun by ruining the greatest day in his brother's life and also to make sure that Asgard would be safe from Thor's idiotic rule for a while longer. Loki offers Laufey a chance to take a few of his best warriors into Asgard to kill Odin and take back the Casket of Ancient Winters to restore Jotunheim to all its former glory. Laufey accepts his offer and allows him to leave.

When Thor's friends disobey Loki to bring word of his actions to Thor, Loki responds by sending The Destroyer after them to eliminate Thor. This action proved his undoing when Thor's courage in confronting the automaton paved the way for his return. Loki welcomes Laufey to Asgard and shows him the way to Odin. Just as Laufey is about to kill Odin, Loki betrays him and kills him with Gungnir. Right after this Thor comes back and Loki strikes him with a bolt of energy.

The resulting fight quickly moves to Heimdall's Observatory where Loki had opened a portal that would destroy Jotunheim. Loki tells Thor that they were never brothers, and fails to see why he couldn't destroy Jotunheim and massacre all the Frost Giants. He starts mocking Thor and threatens to kill Jane Foster. Loki uses magic to fight against Thor on the Rainbow Bridge.

The Bifrost was still destroying Jotunheim, and Thor realises that the only way to stop it is to destroy the Bifrost. He breaks the Rainbow Bridge with Mjölnir, and the Bifrost is destroyed.

Thor and Loki began to fall into the abyss, but the spear in Loki's hand was grabbed by Thor who in turn was anchored to the remnants of the bridge by the newly-awakened Odin. Loki appealed to his adoptive father that by annihilating the Frost Giants he was doing what was best for Asgard. Odin sadly rejected this, and with his Asgardian life now in tatters Loki released the spear and allowed the void to claim him, seemingly killing him.

However in a post-credits scene Loki survives and becomes crazy after being mind-tortured by his new boss Thanos who orders to him to go to Earth to catch the Tesseract, there Loki mind-controlled Erik Solveg with his new scepter (who also controls his mind).

Loki first appears being handcuffed by several Asgardian guards, taken to Odin and having an argument with him. Loki later appears in his cell talking with his mother.

"I remember a shadow, living in the shade of your greatness!"
― Loki, The Avengers.

Thor and Loki spent a lot of time together as children. However, Loki was always jealous of Thor and felt like he was living in his shadow. Loki claimed that he loved Thor, but soon after his lies and tricks the truth came to light. Loki tried to kill his brother several times and said that he only wanted to be his equal. Thor still loves his brother, but after the events of The Avengers he lost the hope of Loki's redemption.

Odin is Loki's adoptive father. After hearing his true heritage, Loki tried to prove himself to his father by trying to eliminate Asgard's enemies, the Frost Giants. Odin did not approve of this, which caused Loki to let himself fall into the abyss. Loki was angry at Odin for keeping his origin a secret, and accused him of prefering Thor and treating them inequally.

Frigga was Loki's adoptive mother. The two were really close, and Frigga was the one who taught Loki many of the magic spells he knows. Loki loved Frigga dearly, and her death caused his complete breakdown.

Retrieved from "https://thor.fandom.com/wiki/Loki_(movies)?oldid=7992"
Community content is available under CC-BY-SA unless otherwise noted.