View source
watch 01:40
The Sandman Will Keep You Awake - The Loop
Do you like this video?
Play Sound
Thor: The Dark World 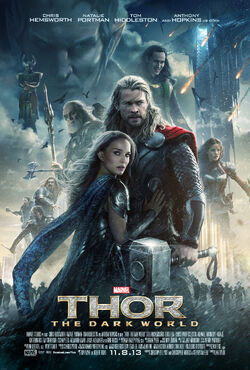 Mark Protosevich
Based on

Eons ago, Bor, father of Odin, vanquished the Dark Elves led by Malekith, who sought to return the universe to its state before creation using a force called the Aether. Fighting off Malekith's enhanced warriors the Kursed, Bor contains the Aether within a stone column. Unbeknownst to him, Malekith, his lieutenant Algrim and others escape into suspended animation. In the present, in Asgard, Loki stands before Odin in shackles and is sentenced to prison, while Thor, alongside warriors Fandral, Volstagg and Sif repeal invaders from Vanaheim, home of their comrade Hogun; it is the final battle in a two-year war. In London, astrophysicist Jane Foster, who has not seen Thor in that time, attempts a lunch date with a man named Richard but is interrupted by her intern Darcy Lewis. She takes Foster to an abandoned factory where the laws of physics are upended in spots and some children have found that objects thrown down a stairwell reappear above them or else vanish. Foster also learns her colleague Dr. Erik Selvig has apparently gone mad and has been detained after attempting to conduct scientific experiments at Stonehenge naked. Foster, after bringing her own scientific equipment to the factory, is sucked into a vortex where the Aether enters her.

The Asgardians learn a rare alignment of the cosmic Nine Realms is imminent, and at spots where the Realms touch, as at the factory, passages are created. When Heimdall tells Thor that Foster is no longer on Earth, Thor begins a search for her there. She has awakened in the factory after hours in the other realm, and finds herself releasing powerful energy when a police officer on the scene touches her. Sensing the force's unearthly nature, Thor brings Foster to Asgard, but its physicians, including Eir, cannot remove it. Odin realizes she is the Aether's vessel and this heralds a catastrophic prophecy. Frigga — Odin's wife, Thor's mother and Loki's adoptive mother — takes Foster under her wing. In holographic form, Frigga visits Loki in his cell to convey her love and disappointment. Malekith and his forces, awakened by the release of the Aether, attack Asgard and turn Algrim into an enhanced warrior called "the last of the Kursed." Malekith and Algrim find Foster in Frigga's chambers, and kill Frigga. Foster there is only a hologram, however; the real Foster is with Thor, who has been ordered to remain and protect Asgard, not pursue the retreating invaders. Following Frigga's funeral, Thor reluctantly teams with Loki, who knows a secret passage out. With Volstagg and Sif guarding his flank, the two commandeer a Dark Elf spaceship and escape with the Foster. With Fandral's help and a separate flying boat, they escape pursuing Asgardian forces.

On Earth, Lewis, who has tried in vain to reach S.H.I.E.L.D., has Selvig released from a hospital's mental ward with the help of her own intern, Ian. Thor, Loki and Foster confront Malekith and Algrim at a desolate waste, where, after a hoax in which Loki appears to betray Thor, Algrim batters Thor and Malekith takes the Aether from Foster. Loki evidently sacrifices himself to keep Malekith from retrieving the Aether, killing Algrim in the process. It is to no avail, as Malekith escapes with the Aether. Thor and Foster return to Earth after stumbling to a portal between realms. The battle shifts to London, where Malekith, in a towering space-vessel, will use the Aether at the exact moment and place of the Nine Realms' convergence to destroy the universe and restore the dark-energy state in which the Dark Elves thrive. As Thor battles Malekith, Foster and Selvig use devices they've constructed to shift energy where the Nine Realms meet. At the last moment, they transport Malekith and his ship to another realm, where the crumbling ship crushes him.

In Asgard, Thor declines Odin's offer to take the throne and tells Odin of Loki's sacrifice. As Thor leaves, the image of Odin reverts to the true form of shapeshifter Loki, who, disguised earlier as a warrior, has usurped the throne. In a mid-credits scene, Volstagg and Sif visit the alien Collector and entrust to his care the remains of the Aether, revealed as one of six "Infinity Stones". In a post-credits scene, Foster and Thor reunite on Earth. 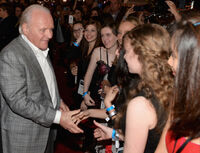 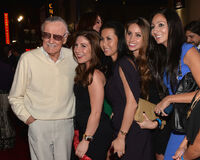 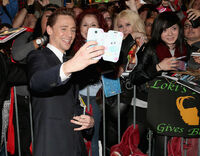 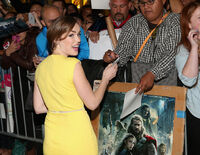 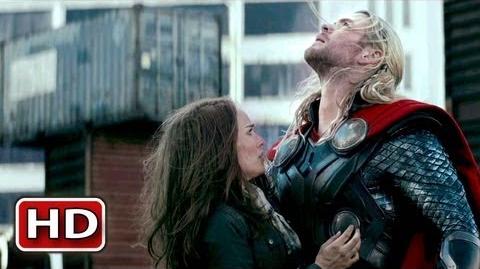 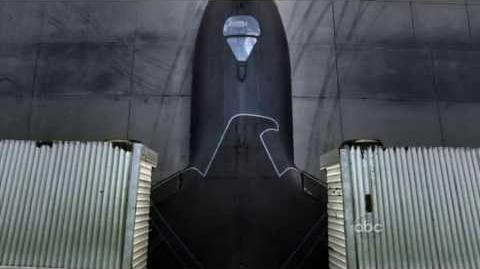 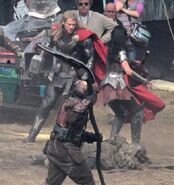