View source
watch 01:40
The Sandman Will Keep You Awake - The Loop
Do you like this video?
Play Sound
Thor 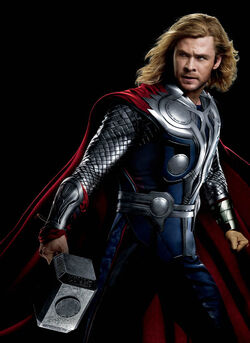 Thor is the God of Thunder, the King of Asgard and one of the founders of Avengers. He is central character of Thor, Thor: The Dark World and Thor: Ragnarok.

Thor is a super-hero and the God of Thunder based on the Norse mythological deity of the same name. Director Kenneth Branagh and Marvel Studios Chief Producer, Kevin Feige chose Chris Hemsworth after a back-and-forth process in which the 27-year-old actor was initially dropped from consideration and then given a second chance to read for the part.

Hemsworth said the film stays true to the comics, stating, "there are so many different versions of the comic books, they've sort of bonded quite a few of them to form this particular story, but it's all very true to the original stuff". On his take of the character, Hemsworth said, "We just kept trying to humanize it all, and keep it very real".

Look into all the research about the comic books that we could, but also bring it back to 'Who is this guy as a person, and what's his relationship with people in the individual scenes?'" About approaching Thor's fighting style, he remarked, "First, we looked at the comic books and the posturing, the way Thor moves and fights, and a lot of his power seems to be drawn up through the ground. We talked about boxers, you know, Mike Tyson, very low to the ground and big open chest and big shoulder swings and very sort of brutal but graceful at the same time, and then as we shot stuff things became easier".

A ceremony in Asgard is about to let Thor ascend to the Throne of Asgard, as Odin is about to finally enter the Odin-sleep after putting it off for so long. Thor revels in the ceremony and undergoes the passage of becoming King from Odin. As Odin is about to name Thor King, he senses that Frost Giants have sneak into Asgard and into Odin's Vault to steal the Casket. Odin, Thor and Loki go to the vault to find the Frost Giants slain by the Destroyer. Thor insists that they must send an army to Jotunheim as Odin did before, though he is forbidden to do so. Later, Thor gathers Loki & his friends Lady Sif, Volstagg, Fandral and Hogun disobeys Odin's orders and travels to Jotunheim to confront Laufey, the King of Jotunheim.

Convincing Heimdall, the warrior who guards the Bifrost, Thor and his allies travels to Jotunheim to interrogate Laufey without success. Thor's pride forces him to begin a battle with them and kills many of Jotunheim warriors. Odin arrives just in time to safe Thor and the others before they are outnumbered. Thor's actions lead Laufey to threaten Asgard with a new war. As punishment for his actions, Thor is stripped of his mighty hammer Mjölnir and his godlike strength and banished to Earth where he is forced to live as a mortal. Thor lands in New Mexico and is hit by a truck driven by researchers Jane Foster, Erik Selvig and Darcy Lewis.

Thor is instantly attracted to Jane and overhears a conversation between two men who claim to have been trying to remove a satellite from a crater in the desert. Thor realizes that the satellite is Mjölnir. Thor is accused by Selvig of being insane due to his claims to be the Son of Odin and is compelled to leave them. Thor uses his Asgardian warrior skills to fight past dozens of agents until he reaches Mjölnir, but finds that he cannot lift the hammer because it has deemed him unworthy. Thor is imprisoned by Phil Coulson and speaks with a vision of Loki, who tells Thor that Odin is dead and Thor's banishment is conditional on the truce with Jotunheim. Thor enters a state of depression until he is freed by Erik Selvig, who tells the agents that Thor is a former physician named Donald Blake. Thor returns to Jane and gives her a fraction of her research which S.H.I.E.L.D. had stolen. He then explains to her about his godhood, Asgard and the Nine Realms and, for the first time, feels comfortable as a mortal man.

Loki sends the Destroyer to kill Thor, leveling the small town. After the Asgardians fail to defeat the Destroyer, Thor offers his life to the Destroyer to save the Earth. A blow from the Destroyer kills Thor's mortal form, restoring his worthiness to wield Mjölnir and reclaim his powers. Thor defeats the Destroyer and promises Phil Coulson an alliance. Thor sets out to return to Asgard, promising Jane that he will return for her and giving her a kiss before leaving. Thor reveals Loki's plot to their mother Frigga and battles Loki at Bifrost, which is destroying Jotunheim with its power. Thor chooses to save the Jotuns by shattering the rainbow bridge and destroying Bifrost. Odin arrives just in time to save Loki and Thor from falling into space. Loki, knowing his actions have not earned him the respect he wanted, allows himself to fall into the abyss while Thor cries out for his brother.

When Asgard discovers Loki is upon Earth, seeking the Tesseract, Odin uses dark sorcery to send Thor to Earth to stop him. Thor lands on the jet in which Loki is being escorted back to the Helicarrier by Captain America, Iron Man and Black Widow, and takes Loki from their custody. Thor tries to convince Loki to give up his plans and return home to Asgard with the Tesseract, though Loki still resents him. Iron Man attacks him and the two trade blows when Iron Man refuses to allow Thor to take Loki away. When Captain America intervenes, he points out that they shouldn't be fighting each other, and asks Thor to put Mjölnir down. In response, Thor brings his hammer down on Captain America, who blocks it with his shield. The shield absorbs the impact, shocking Thor, who realizes they have the same goal and stops fighting.